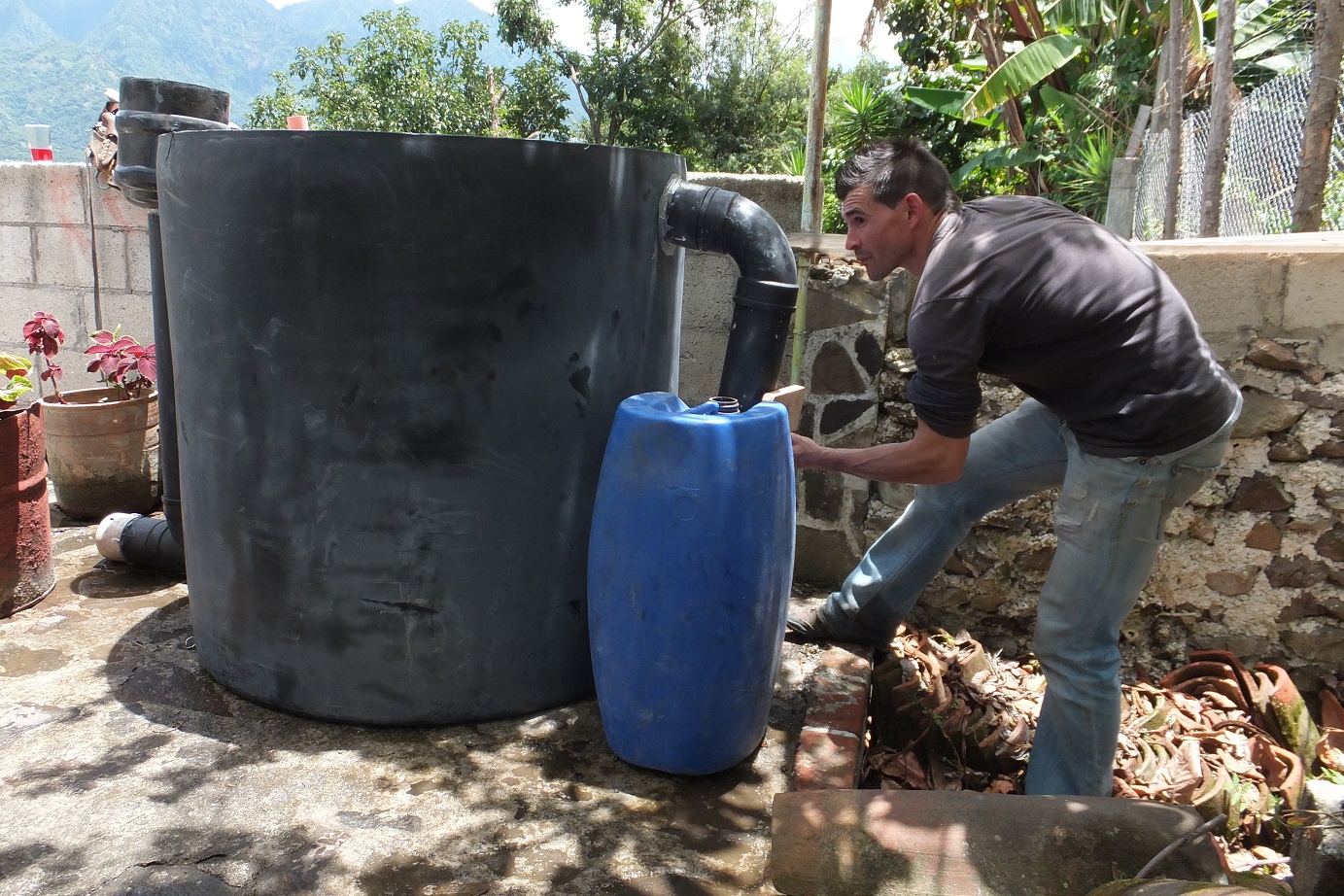 Many people don’t know the system and are very curious. The company gets the opportunity to explain the system to them, they will be happy to learn about it!

Transforms organic waste into natural soil conditioner (called Biol: used as fertilizer, pesticide, to avoid frost …) and biogas (which can be used directly or converted to electricity).

What is a Biodigestion system?

A biodigester transforms organic waste (kitchen or garden, for example) into soil conditioner on one side and biogas on the other side.

Bio is also known as the new golden brown or supreme fertilizer (according to the HIVOS organization).

How does a biodigester work?

Organic waste must be mixed prior to or at least cut into small pieces. They are placed in a tube (see photo above) so they can begin the cycle. You then add water (3 parts water to 1 volume of waste). Caution: the water must be unchlorinated, otherwise the chlorine could kill the bacteria. If the water is slightly chlorinated, let it sit in the sun for a little while so that the chlorine can evaporate.

The digester operates in the same manner as the digestive system of a cow. It is a “living” system since it is composed of different bacterias involved in performing the digestion. It is therefore important to feed it regularly (daily, or give it a double ration when it skipped a meal). If not fed, the bacteria that live in the heart of it will die.

There are different types of bacteria that perform an “inoculation” chain reaction. A first type of bacteria performs the role of chewing, a second type of bacteria takes care of the food rejected by the first and so on. The four different roles of the digestion cycle are well taken care of: “chewing, stomach, large intestine, small intestine”. We also speak here of an anaerobic biogas reactor to talk about the biodigester.

With the pressure of the gas that emanates, the digested solution rises to the surface and is then removed (see photo above). It takes on average a month for waste inserted on one side, to come out as fertilizer on the other side (it’s a long digestion!), but you will be able to recover bill daily (after waiting one month from the system startup).

The gases emitted by the system consist mainly of methane (about 65%), which is the gas of interest here, but also carbon dioxide (30%), and some water and sulfide. The gas exits the top of the digester, and passes through a safety valve composed of water to regulate the pressure, and then through a filter to remove the hydrogen sulfide which is harmful.

The gas can then directly feed gas for cooking, or go through an additional system to be converted into electricity.

To function, the system needs a minimum indoor temperature of 35 ° C. It is important to place it in a sunny place (or at least a place where it’s hot). Also, painting the container black (at least the part of it) ensures more heat.

The system does not emit odors (ie airtight), and one can imagine the positive impact on the environment!

There exists biodigesters of all sizes. I had the chance to attend the installation of the eco-hotel Uxlabil at Lake Atitlan in Guatemala, and meet Sebastian (see video above for the explanation in Spanish) and Julian from the Viogaz company (in collaboration with the Alterna NGO). This is the first biodigester that is installed around Lake Atitlan, and it will serve as a demonstration and example to inspire the surrounding communities.

It is a “small” biodigester that can hold 800L of liquid volume to 800 L of gas, or a total of 1.6 m3. He must provide 4kg of organic waste feed each day, and it cost around €600.This price includes the entire system (including hydrogen sulfide filter, connection and gas stove, the biol recovery) and also the cost of installation, training in its use and maintenance, 2 year warranty, and technical assistance for 1 year.

The life of a biodigester is estimated at more than 10 years. With savings from fertilizer and gas consumption, it quickly pays for itself. In addition, with a larger biodigester, it may be possible to become completely independent energetically, or to sell the surplus of gas or biol…and therefore even make a little money!

Lake Atitlan has been polluted by an African seaweed during the last few years. The idea is also to propose to the localities around Lake to implement many biodigesters which could then transform algae into energy and biol, a great idea, right?